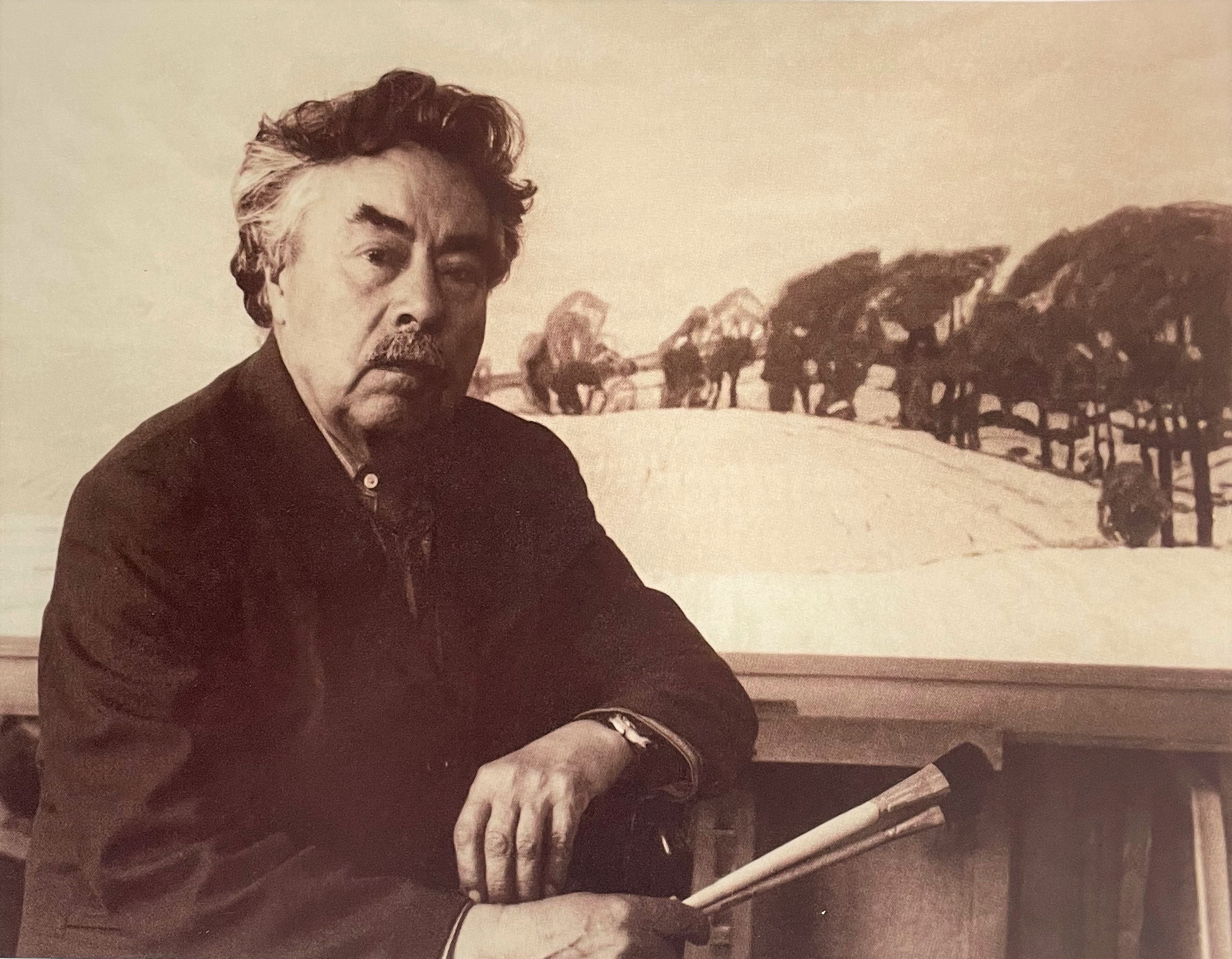 At his 1993 exhibition, the year of his passing, Nikolai Timkov, one of the most important Russian landscape painters of the 20th Century, revealed himself as a deeply sympathetic artist. He was viewed as a composer arranging colors whose sounds vividly echo symphonies by Kalinnikov and Borodin. The exhibition celebrated his life’s work, as he died shortly afterwards. This last show was the monumental summation of an honored painter. The... Show More

At his 1993 exhibition, the year of his passing, Nikolai Timkov, one of the most important Russian landscape painters of the 20th Century, revealed himself as a deeply sympathetic artist. He was viewed as a composer arranging colors whose sounds vividly echo symphonies by Kalinnikov and Borodin. The exhibition celebrated his life’s work, as he died shortly afterwards. This last show was the monumental summation of an honored painter. The public in attendance was shaken with the integrity and wholeness of his artistic outlook, his perceptions, and his consummate spiritual awareness. It signified the emergence of a classic Russian artist whose works are viewed as those of a highly distinguished and original master.

Born in on the steppes of temperate southern Russia in 1912, Nikolai became a student at the Rostov Art College in 1927 and graduated in 1930. He then traveled to Moscow where he attended the Academy of Arts at the invitation of famous academician and painter, Isaak Brodsky. Brodsky’s influence bound him to the best traditions of Russian art of the late 19th and early 20th Centuries. Timkov graduated in 1939 as a professional painter and then, in accordance with the law, was immediately called up for military service with the Russian Navy, serving until 1946. His service to his country took him through World War II.

Military service and the war behind him, Timkov’s career was highlighted by several major one-man exhibitions prior to his last. The shows represented extended periods of his artistic work and became important stages of his growth both spiritually and artistically. Throughout this time, he formed his unique approach to landscape painting, which has become known as “the Timkov style”, discernible through his compositional peculiarities, artistic solutions, palette and characteristic brush work.

Timkov traveled extensively through west central Russia and was particularly fond of the landscape there. His landscapes, always concrete in detail, are also generalized by symbolic meaning. His temples and monasteries tower grandly towards the heavens and are secure structures full of pride seeming to crown the beauty of the landscape. Villages and wooden huts appear to cling to Mother-Earth as if drawing warmth from her. They become blurred against the background of trees and bushes as though trying to wrap themselves in the snow. His keen eye allows us to be aware of every tree, branch and twig, whether hidden beneath the lace of snowflakes, covered in the transparent ornament of spring foliage, or standing in severe winter nakedness.

Nikolai Timkov, sometimes referred to as the “Dean of Post-War Russian Impressionism”, is hung in some of the most exclusive public and private collections throughout Russian, the United States and Western Europe.

During Timkov’s lifetime; 1912-1993, there were no publications devoted to his work, save for an insignificant exhibition booklet. The artist’s legacy was similarly unlucky-it was on the verge of physical destruction after the artist’s death and was only preserved thanks to the efforts of the former Pushkin Collection, now the Timkov Collection. It was part of this project that the first monograph on the artist was published; The Seasons of Nikolai Efimovich Timkov: Master Russian Impressionist, Albuquerque, New Mexico: The Pushkin Collection, 1998.

Artists of Leningrad: A collection of articles/Compiled by I.N. Viunova. Leningrad, 1977.

A number of Western authors ser Abramtsevo alongside Barbizon and Worpswede as a leafing late-nineteenth-century artists colony. In each case artists settled in the country and worked in the open air, yet Abramtsevo was above all a noble estate, one of those “cultural nests” where the owners were fully conscious of their role not merely as welcoming hosts but as organizers of cultural life and of specific and theatrical projects in which artists were specially invited to take part. Thus Savva Mamontov, the famous industrialist and patron who purchased Abramtsevo, pressured his guests into the realization of cultural programs - the revival of folk crafts, the collecting of folk art, the development of Russian applied art in a local version of the Art Nouveau style. The element of organization, of centralized artistic activity, sets this center apart from Western artists colonies, founded as they were on the principles of self-organization and individualism.

Shekhter, T.Ye. Unofficial Art of St. Petersburg (Leningrad) as a Phenomenon of Culture of the Second Half of the 20th Century. St. Petersburg, 1995.

Roitenburg, Olga. Has Anyone Really Remembered that We Had Been… Moscow. Galart, 2004.

The Wandereers: a group of artists set up in 1870 what was called the Fellowship of Traveling Art Exhibitions. They rejected the limitations of academic painting and reached increased “critical realism.”

Union of Russian Artists, a 1903-1923 organization of Moscow and Petersburg/Petrograd artists. The works of the Muscovites were dominated by lyrical plein air landscape painting, and the credo of the whole union is associated with this approach.

“Artists arrived at the Academic Dacha thus: by train to the Akademicheskaya Station. At the station they were awaited in the old days by carts with horses, and in modern days by car or bus. Later they introduced a boat from Vysnyy Volochok, and even later they put asphalt on the road from town and put a bus into action,” recalled the artist’s son. V.N. Timkov, “Zapiski” (Notes), MS, author’s archive.

The Masters of Analytical Art existed from 1925-1932 formed of students of Pavel Filonov (1883-1941), creator of an original creative concept with its basis in the “principle of madeness” and the analysis of objective form.

On the phenomena of the landscape during the siege of Leningrad see A. Borovsky, “iskusstvo erioda blokady kak istoriko-khudozhestvennaya problema” (Art of the Blockade Period as a Question of Art History), in the anthology Muzey (Museum), issue 8, Moscow. Sovetskiy khudozhnik, 1987.

Borovsky, A. The Role of the Collector in Contemporary Russian Culture and Russian Art Collections in the West. In : Forbidden Art. The Postwar Russian Avant-garde. D.A.P., N-Y, 1998.

Artworks in Our Collection